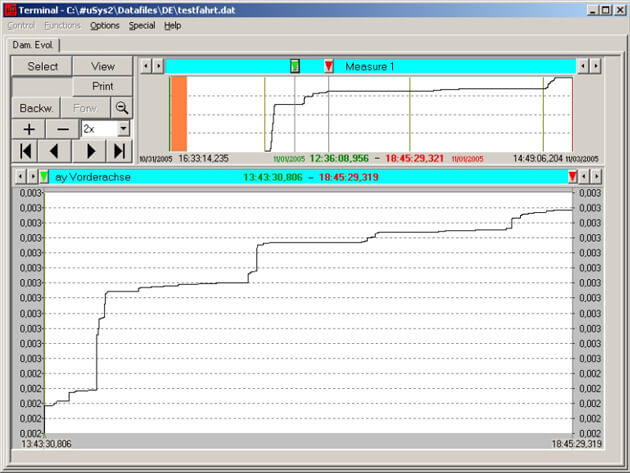 Damage Calculation (based on Rainflow matrices)

The Damage Calculator is an addition to the MAS Terminal Programme for the subsequent (offline) damage calculation based on recorded Rainflow matrices. The result is the damage value which allows for the evaluation of the charged load cycles as to their effect of the damage on the tested part. The method used by the Damage Calculator is based on the “linear damage accumulation hypothesis” (Pilgrem-Miner). This hypothesis assumes that discrete damages of different load cycles can be added straight proportionally to calculate the total damage.

The basis of the damage calculation is the Wöhler curve and characteristic operating load curve, respectively. The parameters of this curve are stored in the so-called damage file that can be customised to the user’s requirements by any editor. Optionally, the parameters of the Damage Evolution Method (DE) may be used.
DAMCALC requires the existence of Rain Flow Method (RF).